Do they? Do they really?

Is it really just the arseholes, dickheads, ‘bad boys’ that win at life? Are you actually going to suggest that you have to be a dick (or have one) to get anywhere in life? Nope, of course not, that would be silly.

But then, then we come accross THE FRIEND ZONE which is something I have already discussed in Friend Zoning… – so just to be clear here. I HATE THE IDEA OF THE FRIEND ZONE. I know, I should probably have started this off with an ‘angry feminist’ alert. But the fact is, for whatever reason, it refuses to die. Why, why won’t it die.

Guys, do you actually have any idea how insulting it is to a woman that you are only interested in her for sex? Y’know we actually have value outside the bedroom? I mean, genuinely, we can make valuable contribution to society, we like being active, we enjo sports, cars, we can be interested in geeky stuff, we can have an interest in gaming be it tabletop or computer, we like walking, being outdoors, we enjoy movies, and they don’t always have to be a romcom, we are interested in current events, politics, are engaging and willing to be there, as friends, as interesting and diverse and any other of your friends. 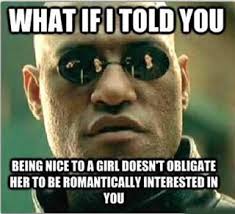 NO! I MEAN IT! A lack of penis does not exclude them from being a valued part of your social group. I am sorry, I am sure that you already realise this, speaking to your own relatives, co workers, various females that you come accross in your daily life. So why do you forget this when you start building a relationship with women. Is it really difficult to understand that women, also like companionship without any strings?

Now, I am going to be super controversial (so unlike me, I hear you say) and suggest that in my personal experience, a lot of men complaining about being a ‘nice guy’ are generally punching above their weight limit. I have lost count of men telling me how women don’t respect them, or are just using them. That they never get the girl, said girl only likes ‘insert stereotype’. So what if she does? Aren’t you also chasing a type?? Aren’t you only speaking to her because you want something?

We all have a certain type, we all have fantasies, we all picture our perfect partner, we like long hair, short hair, straight hair, curly hair, light skin, dark skin, toned bodies, curvy bodies, we will petitte, we like tall, funny, quiet, loud, extrovert, gamers, athletes…. I won’t go on. What I am trying to say is that we all have things that we find attractive. Not just in a potential mate, but in anyone we build a relationship. I have picked outward and easily identifiable traits for my list. Because it is what we notice. It is what we base our social interactions on. But you know what, sometimes, you end up with someone who looks completely different from what you were expecting. Unlike the Hollywood ideal where the blinkers to a partner’s suitability fall off only when you see them in a LBD or a suit… it isn’t like that in real life. It is up to you, Mister ‘Nice Guy’ to be honest with people as to why you start an interaction with them. are you only pursuing them because you find them attractive and want to date them.

And I want to address the ‘gift giving’ in relationships, platonic or otherwise. Women, give gifts. They see something you said you needed/wanted, or that you might like? Or an early birthday present. They don’t give it a second thought and it is not done with an agenda. So sorry, if you are offering to pay for the movie tickets, or bought a present, she may genuinely not think it anything more than a natural transaction in a friendship.If you are only investing in order to get laid, be honest… or actually just hire a prostitute. Because financial transactions are always best done with some transparency.

Edit : Since writing this – or at least starting to write this, there was a post released and went viral regarding a ‘gentleman’ listing reasons why he wouldn’t date a feminist. I posted it to my page with the following comment :

More women are reporting they are unhappy. OMG FUCKING Feminists! How dare women realise that they don’t need to be in a situation that makes them unhappy. THE UTTER BASTARDS! Guess I am exactly the type this idiot is talking about because fuck me it has pissed me off. Hating men?! Sorry hating men due to experiences is exactly that, it doesn’t make you a feminist? It is not a precursor or an entry fee. You don’t have to be raped first by a privileged white athlete while at college to join the club. But according to this idiot, sexual assaults at college? Nah, just art part of the feminist agenda!

When he talks about feminists widening the gap, he really misses the point. We, feminists, women, men, activists, talking heads, random strangers sharing and shouting in social media platforms? We do this to stop the widening .. to move forward, closer, together. We highlight the ills, the wrongs, we highlight the problems, we should about them because we want to change things we want equality we want to make sure things aren’t ignored, brushed away, that we stop treating people in a certain way, that we have that conversation that normalises.

Let us be clear. We don’t hate people based on genitalia, their sex and we cannot afford to burn our bras (at least until the pay gap is closed..)

So there has been some backlash on this gentleman and the unfortunate supporting photo. I wanted to avoid hitting below the belt but frankly, it does feel as if this is merely a backlash from someone who got turned down, again. But to me, this just feels like the next excuse in a long line of excuses that men will use as reasons that they aren’t dating. And I won’t go on anymore. This is infuriating for me. Guys, if you are only looking for someone to ‘date’ and therefore, I am guessing, have sex with, possibly marry, you need to be honest. You need to be open about these things. I know it is difficult and you don’t do subtle. But if you are only pursuing a women for sex it isn’t fair to either of you to not be honest. It is hurtful for both parties, and wastes a lot of time. I guess for this reason, online dating maybe a good thing. At least you can be honest without actually having to look someone in the face. And to reiterate – women are fantastic buddies, not just fuck buddies! 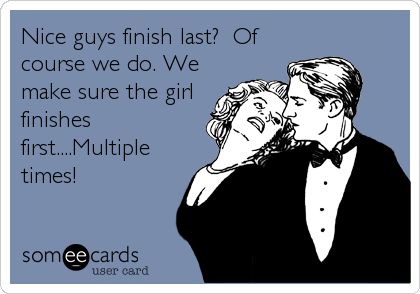